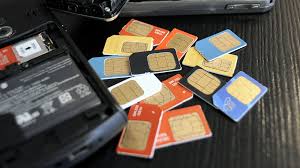 The Nigerian Communications Commission says it will soon audit mobile operators to determine their level of compliance with the regulation on the registration of Subscriber Identity Module cards.

Executive Commissioner, Stakeholder Management, Mr Sunday Dare, disclosed this at an interactive session with journalists in Abuja on Monday.

It was during a similar exercise in August 2015 that the regulatory body found that 5.2 million SIM cards were not properly registered by MTN Nigeria Communications Limited.

This led to the imposition of N1.04tn fine on the mobile operator. The fine was eventually reduced to N330bn. MTN completed the payment of the fine on May 24.

Dare, however, gave the assurance that the reason for the audit was not to make money for the government but to ensure that prescribed processes were complied with.

He also defended the verification of already registered SIM cards which the commission had said was currently ongoing.

According to him, some registered cards do not have the right photographs while some did not capture the right number of subscribers’ fingerprints.

The NCC helmsman said, “The audit is going to take place again. Verification is a continuous exercise.

“Work is on-going to harmonise with the National Identification Management Commission’s database and we are looking towards a future where once you have the National Identity Number, you don’t have to go through the hassles of registration. All hands are on deck to achieve this.”

Dare also disclosed that the regulatory agency was currently engaging in dialogue with relevant stakeholders on the spectrum for drones as well as preparing the industry for five generation networks.

He said, “A few months ago, we had a forum on 5G readiness where all critical stakeholders comprehensively examined the legal, regulatory and technology issues and we are developing a road map.

“In addition to 5G, we have opened up consultations on the spectrum for drones. We are proactively leading discussions on the deployment of new technologies. That is what we always do.

“NCC carries out robust consultations before making any material decision. We probably have the oldest documented consultation guideline which details formal and informal consultation and rule-making procedures.”

Speaking on the quality of service, Dare said that several issues were involved even though the regulator insisted that operators must meet the thresholds prescribed in its Key Performance Indicators.

He added that the energy crises that had bedevilled the country did not augur well for the quality of service as operators were often forced to run generators for upwards of 16 hours in a day.

Dare expressed hope that the country’s power supply would improve and make a positive impact on the quality of service provided by operators.