Absurd government behavior in Africa is arguably standard across the continent today but there are some government actions that defy the limits of absurdity and enter a whole new realm of confoundry. We made a list:

Internet shutdowns: There were no less than 12 instances of intentional internet or mobile network disruptions in 9 countries across Africa in 2017, up from 11 in 2016. Africa has also lost a total of $237 million to these shutdowns/disruptions since 2015.

Netflix “bans”: South Africa’s Film and Publications Board is keen on charging Netflix a licensing fee for the company to offer its services in the country.

Kenya and South Africa both have bones to pick with Netflix – the former cites “inappropriate content” while the later needs its licensing fees paid and Netflix’s catalogue submitted to it for “classification”. Fortunately, Netflix is currently still available in both of these countries, although South Africa’s Film and Publications Board (FPB) really wants that licensing fee.

No one knows what is going on in President Museveni’s head but taxing social media and IM platforms to curtail “gossip” is perplexing. Then to make things a bit more murky, the Ugandan ICT and national guidance minister, Frank Tumwebaze, said the Ugandan government had no plans to tax social media and IM platforms, just the OTT services they support.

Licensing bloggers: In the past, Tanzanian President John Magufuli has also banned pregnant girls from going to school.

Apart from the fact that the Tanzanian government wants bloggers to pay $930 annually for a blogging license, the government also reserves the right to revoke a permit if it feels a blogger publishes content that “causes annoyance, threatens harm or evil, encourages or incites crimes.” No jokes. Taking this incredulousness a little further, government officials can also force bloggers to remove “prohibited content” within 12 hours or face fines not less than five million shillings ($2,210) or a year in prison.” Na wa.

In Nigeria, this is an ongoing battle between the Nigerian Information Technology Development Agency (NITDA) and the Nigerian Computer Society (NCS) on who has more right to register and license ICT professionals in the country. Never mind that mandating a license to code or run social media strategy is as regressive as it gets. Kenyan authorities had the lead on this ICT licensing thing though; in 2017, the government tried to re-introduce the Kenya ICT Professionals Bill which provides for the establishment of an ICT Practitioners Institute which will register and license ICT professionals.

SIM replacement rules: Barely a month after a ban on SIM registrations because the government wanted to install APIs which “ensure real-time, accurate verification and validation of SIM card registration information by National Identification Registration Authority (NIRA),” the government announced new SIM replacement rules. Get this: Not only do you need to get a police report, pay UGX 1000 ($0.27) in a bank and fill a form requesting a SIM replacement at NIRA, you also have to wait five working days for your request to be processed before getting a letter from NIRA authorizing your provider to replace your SIM which then allows you to fill a new SIM registration form with your provider (complete with biometrics and a passport photo). If you make it through all of that, then you pay another UGX 2000 ($0.54) to your service provider before getting your new SIM. 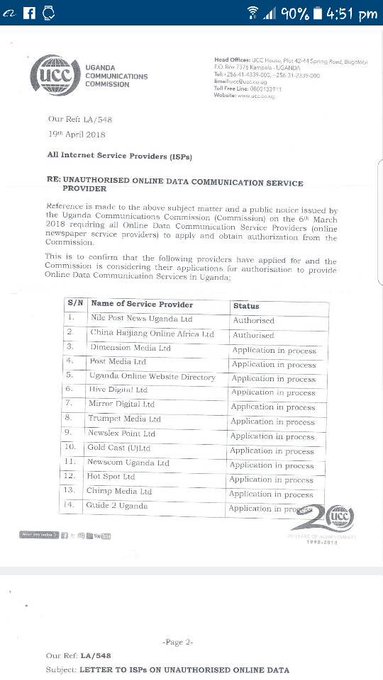 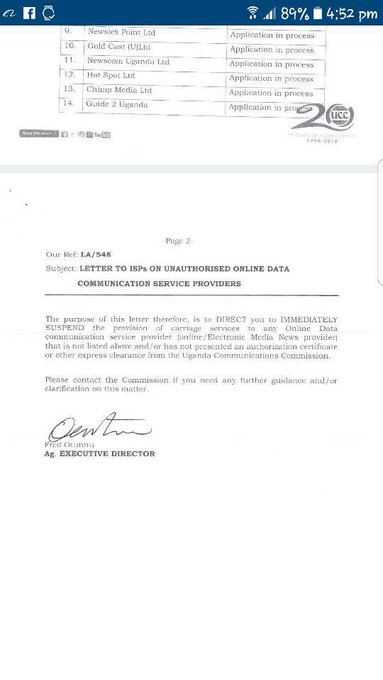 The latest in the Ugandan government’s repertoire of confounding decisions is a directive issued by the Ugandan Communications Commission (UCC) directing ISPs to block“unauthorized news websites” in the country. In the letter issuing this directive, the UCC listed only 14 websites (2 are authorized and 12 are tagged “Application in progress”) as exempt from the block. This means that existing and prospective news websites in Uganda, apart from the listed 14, will have to register with the UCC before they are permitted to publish content in the country.